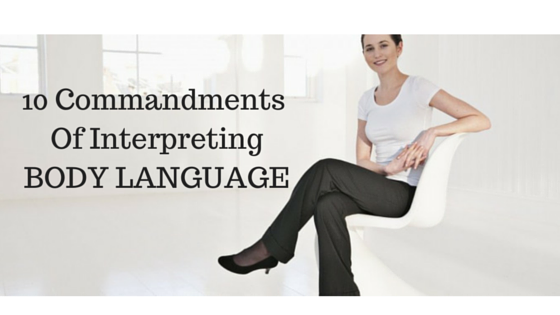 Body language plays an important role in leadership success. Many entrepreneurs and business owners focus on verbal skills, but they fail to realize there are two conversations going on when they meet another person.

The first conversation is the one where words are used to convey information; while the second one broadcasts thoughts, attitudes, and emotions through the body. If we’re unaware of the non-verbal messages we’re sending, the second conversation could undermine the first one.

To successfully read people, we need to collect non-verbal information to evaluate thoughts and emotions.

It is a skill that requires constant practice and training. Here are 10 commandments to interpret body language that will help you to maximize your ability to accurately read non-verbals:

Commandment 1: BODY LANGUAGE REACTIONS ARE MORE HONEST THAN YOU THINK

The brain controls all behaviors, both conscious and subconscious. This premise is the cornerstone if you want to understand non-verbal communication.

The limbic system is that part of the brain that reacts to events around us—in real time and without thought.

These reactions are genuine and are considered to be the “honest” part of our brain. The limbic brain enlists the body to send messages about what it is really feeling. The body will signal stress and discomfort in a variety of ways, and we interpret these behaviors as body language.

Commandment 2: IT’S DIFFICULT TO SPOT DECEIT SO DON’T GET COCKY

There are only clues that the individual is feeling an emotion or thought that is not being expressed verbally. Once the point of stress is identified, it’s possible to pursue the cause of the discomfort.

When I interview people, I look for behaviors that would tell me they are stressed. Or not at ease with one of my questions. Once I asked a businessman if he knew Igor—an individual whom the FBI had identified as a Russian spy. The businessman responded, “No,” but then immediately touched his mouth. I didn’t know whether he was lying, but I did know he was bothered by that question. This prompted me to probe further into this line of inquiry.

Commandment 3: CLUSTER FOR SIGNIFICANCE IF YOU WANT ACCURACY

Conversations are a string of words put together to create meaning. One word, by itself, can mean many things, or nothing. A sentence, however, expresses complete thoughts. Similarly, one gesture can mean anything—it’s only when we put them together that they have meaning. Nonverbal gestures come in clusters so it’s important to observe a person’s initial cluster of gestures to establish a norm.

It’s a serious error to interpret a solitary gesture.

A scratch of the head can mean confusion or it could indicate a serious case of dandruff. Many people punctuate with constant gestures and movement while others are relatively still. They key is to notice how these gestures change during a conversation.

Time is required to accurately read other people. It is a process  because it takes time to build rapport with others. Deception can only be identified if a baseline of the other person’s responses is established.

Non-threatening and innocent questions are likely to receive honest answers, and this is how norms are established. They can be used to measure responses to more probing questions later on.

Norms help to distinguish between a personal quirk and a contradiction in behavior. Contradictions are not goalposts when trying to detect whether someone is lying. Rather, they are signposts that suggest there is either deception, or there’s more to the matter. The person’s response is not consistent with how he or she normally responds.

Read What Every Body is Saying by Joe Navarro.

Commandment 5: LOOK FOR CHANGES IN BEHAVIOR

To read body languages you must notice whether the individual is stressed/relaxed—uncomfortable/comfortable.

A failure to understand this basic premise will lead you to make false assumptions about another’s behavior. If you notice a sudden change in a person’s behavior, it can help reveal the point of deception. This can be either verbal or non-verbal.

I’ve been in interviews with people who were in contact with foreign spies and they were very hospitable and eager to explain the reason for their contact. When I’d mention the possibility of continued contact with the FBI to gage the spy’s activities, most would answer “yes” because they wanted to appear cooperative with law enforcement.

At that point in the conversation, I would look for changes in their body language to determine whether they were being honest in their answer.

I would notice if they purse their lips (the lips disappear into a fine line which indicates stress) or squint their eyes (they wanted me out of their eyesight)! I knew I needed to address their concerns immediately if I wanted to continue contact.

The face is the one part of the body that is most often used to conceal feelings and emotions. Dr. Paul Ekman, an expert on facial micro-expressions, states that the face is the primary place we display emotion. This is also why the face can be incredibly untrustworthy. According to Ekman, we lie with our faces because that’s what we’ve been told to do since childhood.

“Take that look off your face,” was one of my mom’s favorite expressions as I grew up.

The face can lie and tell the truth, often at the same time. While the face can be untrustworthy, most people still leak micro-expressions. These expressions are fleeting and can be easily missed.

Not all of the muscles that produce facial expressions are equally easy to control. Some muscles are more reliable than others. The forehead is the chief focus for reliable muscle movements. It can reliably indicate negative emotions such as sadness, grief, distress, and even guilt.

Eyebrow actions—raise and lower—are the most frequent facial expressions, and they are usually made in conjunction with forehead movements. When eyebrows rise and pull together, it is a reliable muscle movement that occurs with fear, worry, apprehension, and terror. The eyebrows express true emotion. When a person is calm and positive, there are fewer forehead furrows and eyebrow movement unless they are used to emphasize speech or as question marks.

The third most reliable facial action is the mouth area. Anger, tension, frustration, and fear can all lead to a narrowing of the lips. All of these emotions can easily be concealed by a smile.

But pay attention to the entire face: for a smile to be genuine, there must crow’s feet around the eyes and the cheeks must push up.

A smile is a sign of submission, which is why many dominant individuals don’t smile. I always smiled when I began an interview with a subject because it directly influenced how they would respond to me. The last thing I wanted to do was intimidate them or put them on the defensive. On the contrary, I wanted to put them at ease so I could create a baseline of their behavior. Smiling helps create empathy, something that can be important if you want concessions in a negotiation.

Commandment 9: TALK WITH YOUR HANDS

There are more nerve connections between the hands and the brain than between any other parts of the body.

Our brain is hardwired to engage our hands to accurately communicate our emotions, thoughts, and feelings.

I make an effort to shake hands with people I meet. The handshake that conveys equality is when both hands are vertical. As a woman, I’m frequently in situations where a male will offer a dominant handshake—his palm faces down. Palms down indicate dominance (think of Adolph Hitler’s Nazi salute).

To counter a dominant handshake, I simply move to the right of the individual so we are almost side-by-side. He is forced to move his hand into the vertical position as I move to his right.

Commandment 10: BELIEVE WHAT THE FEET ARE SAYING

As unglamorous as it sounds, feet are the most honest part of the body.

Children and adults alike bounce up and down when they see someone, or something, that makes them happy.

I met with an individual whom I suspected had contact with a Russian spy. I began the interview and asked general questions, as much to gain a baseline as to confirm background information that I already possessed. His answers were forthcoming and his body language was relaxed.

However, when I moved the conversation toward the Russian spy, he became rigid. He uncrossed his legs and sat with his feet flat on floor with ankles locked. Again, this didn’t mean he was a liar, but it did indicate he became stressed at the point in the conversation when we started talking about the Russian.

These 10 Commandments of Body Language will help you more accurately understand the importance of non-verbal behaviors.

Whether in business or life, always focus on whether the individual to whom you are talking is exhibiting stressed or relaxed behaviors.