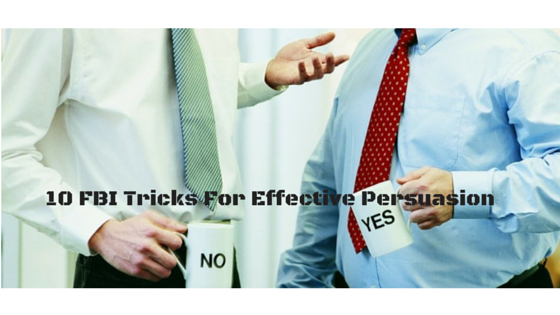 Some of my biggest laughs come from watching Hollywood movies and TV shows depicting FBI agents as indestructible bullies walking that fine line between good and evil. They are either taking the law into their own hands in their pursuit of justice or abusing their power to crush the little people that get in their way.

The silliness of it all is pure entertainment for someone like me, a former FBI agent. The danger that lurks, however, is that impressionable audiences actually start to believe all the crap they see, read, and hear.

Bullying, intimidation, and rudeness pump up hormones and get everyone’s juices flowing. The results are good ratings.

The fact is, FBI agents use persuasion to get the job done in the majority of cases—not brute strength and ignorance.

No matter your situation in life, persuasion is a skill that is as instrumental to your success as it is to an FBI agent. Persuasion, at its core, requires emotional intelligence because it is essential that you have enough awareness of emotions to develop a rapport with another individual.

Emotional awareness is an essential component of mental toughness because if you aren’t savvy enough to read other people, you will never be able to adapt your own approach to accommodate different personalities.

There are a few tricks of the trade, and here are 10 that will help you to get people to lean toward your way of thinking when it matters most:

There is a reason FBI agents wear suits and workout every day. They portray the image of someone who is both professional and capable of handling themselves in every situation. Most people make snap decisions within the first few seconds of meeting you. They spend the rest of the conversation justifying their first impression.

The person who makes a good first impression is the one who controls the image they project to others. If you believe you are inferior, you are—regardless of your qualifications. The way we think affects our behavior, and this is the essence of mental toughness:

To make a great first impression, you need to manage your thoughts, emotions, and behavior in ways that set you up for success.

TIP: Take advantage by paying attention to your appearance, posture, voice, and mannerisms. The secret weapon is likability and it can make a huge impact on your success.

Dale Carnegie, the author of How to Win Friends and Influence People, believed that using someone’s name was very important. He said that a person’s name is the sweetest sound in any language for that person.

Research shows that people feel validated when they are referred to by their name—just don’t overdo it!

TIP: Personalize your interactions with others by using their name. Not everyone is good at remembering names, so you may need to collect business cards and make notes on the back of them to help jog your recollection.

Common sense tells us that if we nod when we’re listening to someone, it indicates that we are in agreement. A head tilt, however, is a gesture reserved for times when we are truly comfortable. A head tilt is a powerful signal that indicates we’re friendly. It’s difficult to do around people we don’t like.

TIP: When you tilt your head and nod, you are sending a more powerful non-verbal message that indicates you are listening, comfortable, and receptive.

To be most effective, talk no longer than 30 seconds at a time in a given conversation.

According to researcher Andrew Newberg, the human brain can really only hold on to four things at a time, so if you go on and on for five or 10 minutes trying to argue a point, the person will only remember a very small part of that.

TIP: Speak briefly, sticking to one or two sentences or around 30 seconds worth, because that’s really what the human brain can take in.

Mirroring is observing a person’s body posture and then subtly letting your body reflect their position.

Mirror neurons fire when you reflect an emotion you see in others. Researchers have discovered that those who had been mimicked were much more likely to act favorably toward the person who had copied them.

TIP: Mirroring is an effective way to build rapport and increase a person’s comfort level when you need to use persuasion to get your point across.

6. Paraphrase And Repeat Back

One of the most positive ways to persuade others is to show them that you truly understand how they feel—even if you disagree with them.

Studies have shown that when you listen to what someone has to say, and then rephrase it as a question to confirm that you understood it, they are going to be more comfortable talking with you.

FBI agents use this to help them get confessions, but you can use this same trick because people are more likely to listen to what you have to say once you show them that you care about them.

It should be no surprise that a smile creates the highest positive emotion—but it has to be a real smile! In a genuine smile, the lips are drawn toward the cheekbone, eyebrows rise, and pupils dilate to open up. There is no more powerful persuasion tool in the world, or more disarming, than a genuine smile.

We are better looking when we smile. When we smile, people treat us differently. We’re viewed as attractive, reliable, relaxed, and sincere. Recent studies indicate that seeing an attractive smiling face activates the region in your brain that process sensory rewards. This suggests that when we view a person smiling, we actually feel rewarded.

TIP: A smile is contagious. It can make us appear more attractive to others. It lifts our mood as well as the moods of those around us.

8. Don’t Correct People When They Are Wrong

Dale Carnegie also pointed out in his famous book that telling someone they are wrong is usually unnecessary and is a catastrophic move if you want to persuade someone to do something for you because it’s an attack on their ego. When someone says something stupid and we disagree with the statement, our first response is to correct them. After all, they are wrong and we are right! We start an argument, no minds are changed. If anything, both sides are even more entrenched.

I’ve used a technique called the Ransberger Pivot many times and it’s an effective approach (unless you’re dealing with a nutcase or radical in which case nothing will work.

The Ransberger Pivot has 3 steps:

Step 1: Remain quiet and listen to what the other person is saying.

Step 2: Look for any points of understanding that you are sure you both agree on. Make an intelligent and thought-provoking response for their side of the argument. When you focus on points of agreement, they feel you are joining with them instead of fighting against them.

Step 3: Seek to understand how they feel and why. Then explain the common ground that you share with them. Use that as a place to start when explaining your position. It makes them more likely to listen because you’re not telling them to pound sand.

Sometimes it was hard, but I found a way to agree with some aspect of the other person’s argument, instead of telling them I thought they were ignorant and a nutcase. While that might have made me feel morally superior, it’s an incredibly unproductive response. When we find commonality, it lessens the anger or other negative emotion that can erupt when tensions are high. However small the commonality, it gave me a base from which to work.

Common ground can be added as the conversation continues, but what is key with the Ransberger Pivot is that the other person doesn’t feel insulted because everyone is treated with respect. This can be essential if your goal is to win the person over to your point of view.

TIP: The Pivot diffuses hostility and builds harmony by showing that you share the other person’s concerns. They are then more likely to listen to and hear your answer. The Pivot doesn’t come naturally. You’ll need to practice it.

9. Say Please And Thank You

“Please” and “thank you” are some of the most powerful combinations of words in our language. They are simple words, and yet it seems that most people don’t use them enough. When we make someone else feel important and appreciated, we’ve brightened up their day. That person is more likely to pass on that feeling to someone else.

Most of us don’t intend to be rude, but we’re so caught up in our cell phones, iPads, or our own lives that we don’t see what is around us. Researcher Robert Cialdini has shown that people respond to politeness! Treat people with respect. By simply adding the phrases “please” and “thank you” when making a request, compliance is much easier to achieve. Successful people do what the unsuccessful are unwilling to do.

TIP: You can make yourself stand out in a rude society by remembering your manners, treating people as respected individuals, and doing what others are unwilling to do.

This one may seem obvious at first, but there are some important caveats to it.

For starters, it must be sincere for it to be persuasive.

Second, remember that we look for cognitive balance by keeping our thoughts and feelings organized in a similar way. So, if you flatter someone who has high self-esteem, they will like you more because you validated how they feel about themselves.

TIP: People can sense a suck-up a mile away, so be sincere in all that you say.