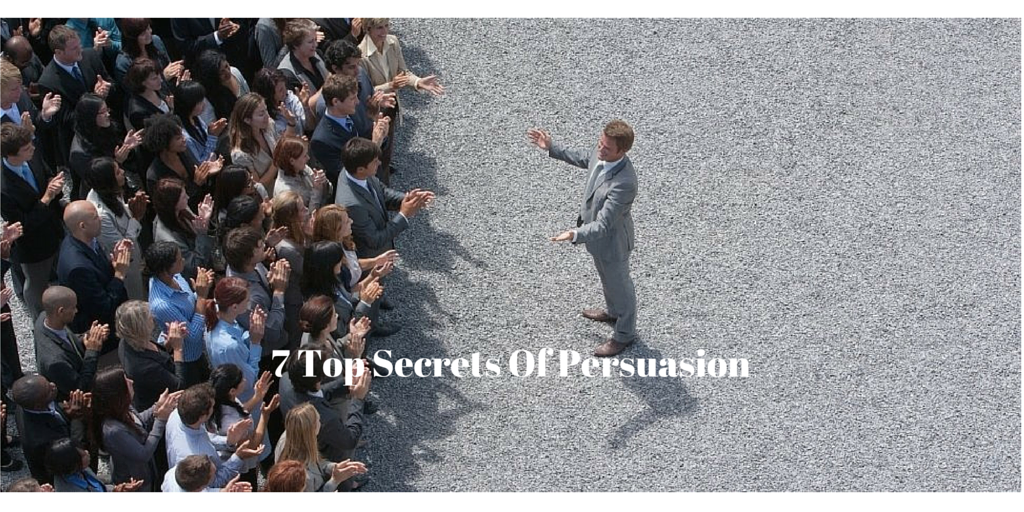 FBI counterintelligence agents, such as myself, recruit foreign spies to work for the U.S. government. It’s not that we are selling anything; instead, we are using persuasion to make our point. Very often, we are successful.

You may never find yourself in a situation where you’ll be confronted with a Russian spy trying to steal classified information, and chances are even slimmer that you’ll be asked to recruit him to work for our side, but there will be times that you will absolutely need to make your point.

Persuasion is not just for spies, salespeople, and teenagers.

As entrepreneurs and business owners, you may need to persuade an investor to take a closer look at your proposal, get assistance at work, or persuade employees to perform better. The truth is, we’re all negotiators.

I took FBI hostage negotiation training at Quantico, and the first thing I learned is that persuasion techniques not only work with barricaded criminals wielding assault rifles—they apply to any form of disagreement or any situation where you need someone else to see your point of view.

Persuasion is about far more than argument and counter-argument.

Here are 7 top secrets of persuasion and tips on how to counter them:

1. Be Bold And Assertive

Humans equate confidence with skill. If you come across as confident, even the most cynical person will be at least partly persuaded.

The key is to stop using qualifiers like “I think” or “I believe.” Instead, if you think something will work, just say it.

Let your enthusiasm and confidence show through and people will be more likely to be persuaded.

Resistance is easiest when we feel sharp and alert. That is when we’re in a better position to raise a counter-argument, maintain our position, and spot persuasion attempts coming our way.

Medical inoculations work by giving you a little of the disease so that your body can prepare itself for attack in the future.

Propose an idea that takes on a new angle that people haven’t thought of before. Then, introduce an alternative approach or solution that is a bit closer to their way of thinking. Chances are very good that people will jump at the alternative, even though it would have been immediately dismissed if introduced before the first one.

This is how ex-spouses, hostage negotiators, and politicians extort us every day with persuasive arguments. In the end, we grab the alternative and think we’ve struck a good deal.

Expose yourself to different types of arguments and positions you will likely come across. When you know what’s coming, it’s easier to psychologically prepare yourself. Be wary of the same old argument presented in a slightly different way.

Make sure your credentials are solid. Research has shown that we defer to those who appear to have authority. If you don’t have the heft to make a persuasive argument, align yourself with someone who does.

People don’t often second guess or question someone who makes a recommendation if they believe the individual is either an expert or someone with authority.

Be extremely wary of anyone who relies entirely on authority to influence you.

4. Validate What The Other Person Says

This may sound counterintuitive, but if you don’t let the other party have their say, you can talk until you’re blue in the face and they will not have heard a word you said. Instead of listening to you, they were forming their own counter-argument in the mind.

The best way to quiet the voice in the other person’s head is to hear the other side out and then make your argument.

5. Mirror Both Behavior and Words

A lot of research has been conducted on the effectiveness of mirroring a person’s behavior to create rapport. We smile when others smile, lean in when they do, and give the impression of sharing a secret understanding that is personal and makes us appear more likable.

Effective coaches, therapists, and hostage negotiators simply repeat the last word that was spoken by the other person. It indicates that they are listening and engaged.

Think about whether the persuasion attempt is trying to maneuver you to do something that you wouldn’t ordinarily be interested in doing. Try to dissociate the speaker with the message they are conveying.

6. Adapt To The Personality Of The Other Person

An essential element of mental toughness is the ability to accurately read the emotions of others and then adapt your behavior accordingly.

Match your personality to your boss, employee, or client. Assess whether they are introverts or extraverts, analytical or a visionary, purpose-driven or security-driven, goal-oriented or people-oriented.

If you’ve been a good listener, you will be able to make these distinctions.

Determine whether the person is sincere or just trying to please you by saying things they assume you want to hear.

7. Add Charm To The Conversation

My years in the FBI were a grueling course in learning good manners because people were not going to talk to me, let alone follow me unless I could engage them in a way that was meaningful and productive.

Demonstrate warmth first when connecting with others, develop a bond and then be competent in the work you do together.

It’s much easier to change people’s minds if you take the time to develop more than shallow, fleeting relationships with them. It comes down to this: in a world of mass media you must learn how to charm people if you want to persuade them to take your point of view seriously.

We are more easily swayed than we realize. Be wary of all attempts to camouflage a persuasive message.

What ways have you found to be the most persuasive?