3 Reasons You Need More Than Success To Be Awesome 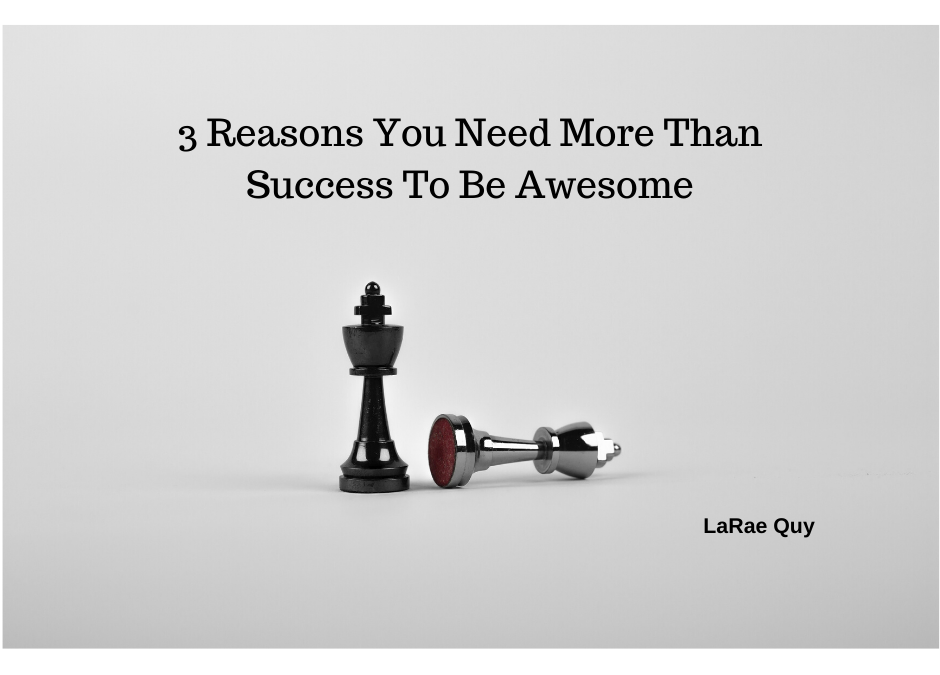 During my four months in the FBI Academy, I shot over 3,000 rounds of ammo in firearms training, spent untold hours in the gym building up enough muscle to pass the fitness test, and endured an endless number of mock interrogation sessions.

We spent hundreds of hours practicing real-life situations so that when we hit the streets with our badge and gun as newly minted FBI agents, we would be successful.

It didn’t take me long in the real world of hard knocks to understand that practice doesn’t always make perfect. Just because I’d practiced how to be a federal law enforcement officer in training, it didn’t mean I’d be successful. Those long hours of practice were not enough if I lacked the other attributes I’d need for ultimate success.

The “10,000-hour rule” popularized by Malcolm Gladwell in his book Outliers really rankles me.

He seduced readers into thinking that practice does make perfect—if we just keep hammering away at it long enough.

To begin with, just because we put 10,000 hours into an activity it doesn’t mean we’ve made progress and become an expert. We all know people who have shuffled to work every day for 40 years, punched a time clock and put in well over 10,000 hours. Many of them were neither successful nor an expert. To become an expert means that we move the marker down the line to show progress has been made.

We all understand how failure provides ample opportunity for growth and progress, both personally and professionally. What we fail to understand, however, is that it’s very difficult to learn from success. Too often, success is where we stop on our journey to the realization of our full potential. We settle for where we found success rather than pursue what is truly meaningful to us.

Here are 3 reasons you need more than success to be awesome—in both life and business:

1. Success Lulls Us Into Complacency

One thing FBI agents learn early on in training is it’s not the streets or guns that will kill you—complacency is what will put you in harm’s way! Always be alert and aware of what is going on in your environment.

When you pursue things you love, it produces passion, and passion brings motivation. If you’re to the point where you just go through the motions, complacency has set in. Complacency is where you go to wither up and die.

The biggest battlefield in the world goes on inside our minds. It’s the place we make life and death decisions about the way we live, what’s meaningful to us, and what we’re willing to do in order to live the life we want.

Complacency will cause you to stray from the path of growth and progress, which may not sound like a death sentence at first. But it is where you will go once you no longer care about improvement, either in business or life.

How To Make It Work For You: Go back to the drawing board and write down what truly inspires you to get up every morning. To be effective, it must transcend money or success. You may make money and achieve success along the way, but remind yourself of why you love what you do. Be a student of your passion and you’ll jettison complacency from your mindset.

Look no further than Alan Greenspan and the financial meltdown in 2008 for an example of how success can make us overconfident. In October 2008, Greenspan admitted to Congress he was shocked that his financial models had failed. He no longer looked at them with a critical eye because they’d worked in the past.

Alexander Pope once said that a little learning is a dangerous thing. Studies have shown that just a little learning is enough to make people feel they’d learned the complete task. It’s called the “beginner’s bubble.” My training at the FBI Academy gave me just enough knowledge to feel overconfident in my abilities. What I quickly learned is that I needed more than my puerile successes at the Academy to be an effective FBI agent; I needed mental toughness to keep going, whether or not I felt confident if I wanted to make a difference in my profession.

After we move up a few notches on the ladder of success, the beginner’s bubble is replaced by a “victory bubble.” Our success leads us to believe we’re better decision-makers than we really are. It also fails to remind us that the market and environment around us constantly change.

Research has found that doctors learning to do spinal surgery usually do not begin to make mistakes until about their 15th iteration of the surgery. Similarly, new pilots rarely get into accidents, but their accident rate begins to rise until it peaks at about 800 flight hours, where it begins to drop again.

How To Make It Work For You: Overconfidence is a common character flaw in those who lack humility. To be humble is not to think less of oneself, but to think of oneself less. Work to develop your emotional intelligence. If you do, you’ll be more aware of yourself and others around you. Emotionally intelligent people focus outward as they absorb more information about the people and the situation around them.

Are you mentally tough? Take this FREE mental toughness assessment.

3. Success Causes Us To Ignore Advice

If we’re successful and in a position of authority, we tend to shut down criticism or those with opinions that differ from our own. We place more weight on our own opinion than on the opinion of others because we’ve used our judgment to get to where we are in life.

And it works! Until it doesn’t.

When you ignore the advice of others, you may miss innovations, fail to recognize a dip in the market, or ignore the rumblings of a demoralized team. Maybe you had the winning formula back in the day, but times have changed. You may need to update your views on how to make progress in an environment that constantly changes direction.

There are many reasons why successful leaders don’t welcome advice from others. First, the ego takes a hit because you admit you don’t have all the answers. Well, that just means you’re human so get over it. Second, advice often means change, and no one welcomes change except babies—and that’s only because they know what to expect. But change is the breeding ground for growth and progress.

“Every person that you meet knows something you don’t; learn from them”—H. Jackson Brown Jr

How To Make It Work For You: Seek feedback because it’s the best path to improvement, growth, and success. When you ask for advice and feedback, it shows everyone that you’re willing to learn and become better. And that is always progress.

Photo by Sebastian Voortman from Pexels